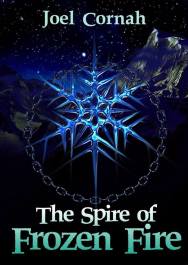 “…It was vast and unshakable, reaching into the clouds and beyond them. Peak upon peak, spikes of crystal jutted ever upwards until they reached a point that scraped the edge of the sky. Glittering blue and white, each spear of glass had a face smoothed by centuries of wind, but their edges stung the eyes with their sharpness. It was as if a million blades made for giants had grown out of the ground – not just giants, though, giants among giants…”

Set several years before the events of ‘The Sea-Stone Sword’, The Spire of Frozen Fire tells the story of Jareth, the pirate, who alone travelled the endless tundra of the south. She found the ancient prison of the Pengs, Bron’Halla, the Mourning Hall. A tower of ice and crystal.