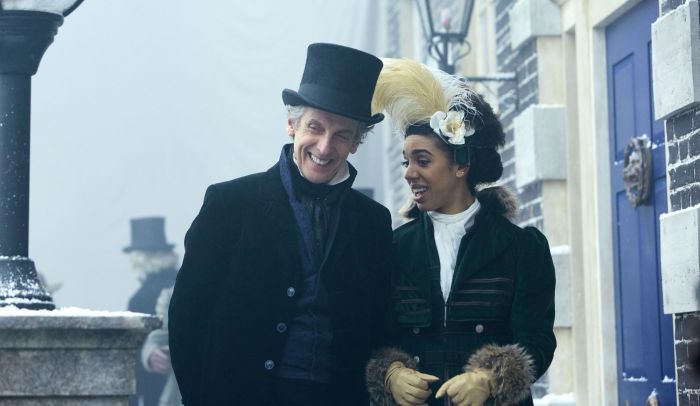 There’s a monster living under the Thames, and it’s eating people.

An ice covered river, street urchins, and the Doctor in a top hat – this episode has it all.

A definite improvement on last week, resolution-wise, but somewhat lacking in a grand climax. There are some wonderful moments, and once again the spark between the Doctor and Bill is the star of the show.

“Slavery is still a thing”

The episode opens with Bill addressing something that people have been talking about especially since The Shakespeare Code. The fact that the history of Britain is less than kind to non-white people. The Doctor takes a moment to acknowledge the horrors of slavery, a haunted look passing over his face, before moving on. It wasn’t much, but somewhat better than the 10th Doctors ‘Just walk like you own the place’ attitude.

A little later, Bill comments on the fact that Regency England is a lot more black than they show in the films. The Doctor’s “So was Jesus” response was pretty much perfect. The episode then introduces us to a group of street urchins of various skintones and despite some initial setbacks – namely the death of one of them – the Doctor and Bill soon forge a friendship with them.

When, somewhere towards the third act, the Doctor and Bill confront a racist aristocrat, it should come as no surprise that it does not end well. This is a good bit of build up and pay off from writer Sarah Dollard – having established more of a healthy relationship between the Doctor and diversity, when he is faced with a truly awful man, he reacts accordingly.

Punching racists is nothing new for the Doctor. Fans of the Third Doctor – Jon Pertwee – may remember his fondness for Venusian Akido. Though he would often seek a diplomatic solution, he wasn’t beyond dealing out the occasional chop to the neck.

In this instance, with the Doctor very much choosing to side with the marginalised against the upper crust, it is very much a case of the Doctor’s true qualities coming through. As the Seventh Doctor once said, ‘You can judge a man by the quality of his enemies’.